Definition:  A digital currency in which encryption techniques are used to regulate the generation of units of currency and verify the transfer. Simply put, cryptocurrencies are electronic peer-to-peer currencies.  They don’t physically exist. 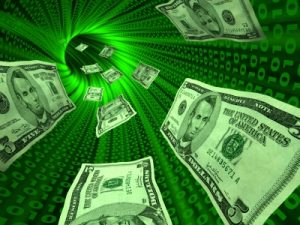 The are many types of cryptocurrencies.  Bitcoin is probably the most well-known.  The pioneer in cryptocurrencies, Bitcoin was created in 2009 by the mysterious Satoshi Nakamoto, whose true identity has yet to be verified. (Investopedia 8/8/2018, Bitcoin)

Cryptocurrencies do not rely on central banks to verify transactions.  Rather, transactions are  recorded on public ledgers through the use of blockchain technology.

A block is a unit of information from a transaction on the cryptocurrency network.  An example would be Trader X sells to Trader Y, or Trader B buys from Trader C.  Each block includes a reference to the block that was added just before it, which makes the chain.  It also makes it almost impossible to break the chain.

Each transaction is recorded as a cryptography system (a long string-code, around 30 characters, that code is theoretically more secure than Fort Knox.) There is no mention of individual names or accounts, only these codes.

You don‘t have to ask anybody to use cryptocurrency. It‘s just software that can be downloaded for free. Once installed, Bitcoins or other cryptocurrencies can be sent or received. No one can prevent you. There is no gatekeeper.  After you indicate that you want to buy or sell, the information is sent out across the network and someone must accept your offer.  The transaction is not complete until it is confirmed.  Miners confirm the transaction.  A miner can be almost anyone that can use the computer and connect the next chain to the string.  Confirming the transaction is very quick –  minutes, as opposed to traditional banking which could take days.